← more from
SWND
Get fresh music recommendations delivered to your inbox every Friday.

by The Cosmic Array 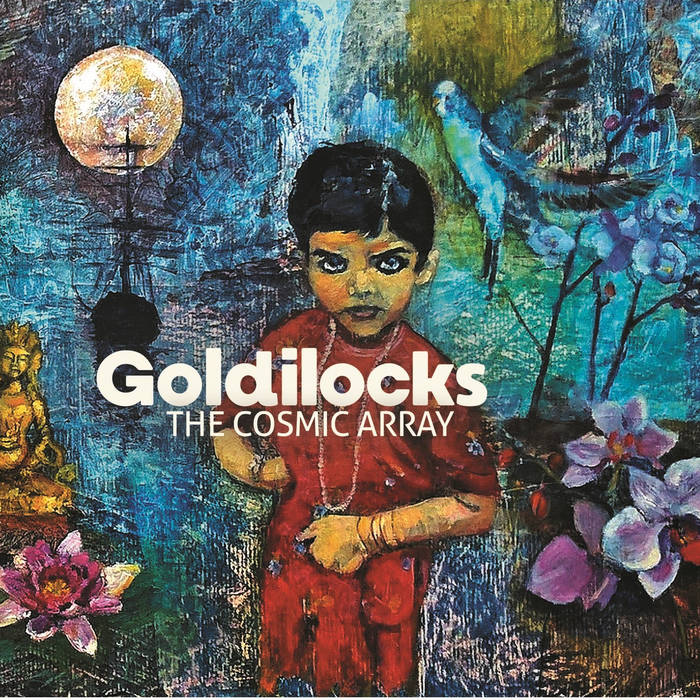 The songs come from a peculiar period in history. There had been a political polar shift, not that the West was some kind of guardian of freedom previously, but something sinister had even replaced that; as monstrous drone warfare became completely acceptable and regime change, aggressive, illegal war, commonplace. With that worrying backdrop, I sat down to write a batch of songs for the third album. Armed with my acoustic guitar, 4 track recorder and journal I began making demos of songs for what would become 'Goldilocks'.
I was angry at the callous change in the world, austerity, xenophobia and the terrifying feeling that the catharsis of history was now serving up fascism as the next political hors d'oeuvre once more. Greed was the new black. 'Refugee' was a pejorative word. The mainstream media became what they themselves used to describe Soviet media as being in the 70's and 80's - State propaganda. It felt like paradise had been co-opted by dystopian overlords. Orwellian became part of the vernacular in a literal description of the descent into political madness
So I had my subject matter. I went at it with a relish.
I think I demoed about 30 songs. Pretty excessive for me, but I felt like I wanted a lot to choose from so I could distill this album into something compact, strong, dense. I was conscious that this was my political statement, something more urgent, more necessary.
On the previous album we'd included an instrumental track called 'Drones'. An almost unlistenable industrial noise of feedback and howling synth about militarised armed drones. I called it a 'protest instrumental'.
I thought maybe I'd overdone it, but I'm particularly saddened by how quickly we accepted these horrible immoral machines of death, with very little questioning.
The first song we recorded was 'Blah, Blah , Blah'. I was ruminating about the protest song 'Suicide is Painless' from Robert Altman's classic 70's movie M*A*S*H. I liked the idea it was quite gentle. At the time I didn't know Altman's 14 year old son wrote the words! Anyway 'Blah, Blah, Blah' was my response to that, and also the antithesis of the heavy handedness of 'Drones'. We also recorded 'Always' the same day.
There's a running theme in the Cosmic Array output of wanting each track to sound radically different from the previous one. This goes back to the sleeve notes on the first album, where I explain about a particular mixtape that was with me for 3 months on my Erasmus student exchange, that gave me the chance to study and travel through Greece back in my art college days. This piece of continuity is always in my mind for the band. A band constantly reinventing itself from track to track. I'm always looking for something a bit different to set us apart from the pack, give us some identity to work off.
I was so enmeshed in the landscape of the political rant, I'd almost forgotten we were also a Sci-fi band. I thought of ways I could consciously weave that element into it. One of my favourite sci-fi movies is 'Dark Star' by John Carpenter...a comedy in space that uses country music as it's soundtrack. I always thought it juxtaposed a lot better than even Kubrick's use of Strauss's 'Blue Danube' in '2001', and had a comic element too. So I too called on the spectre of 'Benson Arizona'. I gave pedal steel player and old friend Rhodri Viney a call, since our regular pedal steel player, John Berry had moved to Canada.
So those were the elements that make up 'Goldilocks'. The title refers to the habitable planetary area of the solar system called 'the Goldilocks zone' .
Hopefully this album would be 'just right' too, but you never can tell. That was my intention though, to make an album that was as good as I could make it. I suppose it always is.
The artwork is from a mural I painted on the wall in the basement of an old department store. An 8ft by 13ft post apocalyptic world with only robots and androids left to wander the earth. The android depicted approaches an old broken robot. An ancestor, idol, graven image, God. Since painted over, I'm glad I had the idea to use it for the cover of this album.